Neurosis and Excitement at 155 Rivington

TODAY IS THE OFFICIAL FIRST DAY OF IRON BLOGGER

I’m super-excited by everyone who decided to join in. And I must admit I expect their posts will be much better than mine. For me this is an experiment in lowering my standards for my writing: more record than reflection — and it seems as though so far it is a record of neurosis. Maybe this is why I came back to New York, too, where I fit in, here in the capital of neurosis. After all, the only solace in fretting is knowing other people are sharing it … right?

As time goes by, we do seem to be coalescing into more of a group and I am really enjoying that feeling. There are definitely folks I talk to more and less, and other mini-groups forming, as you’d expect, but also just more of feeling like a community.

This morning we had a community discussion about the Aram Bartoll talk and his work (as well as Cory Arcangel’s) and while a lot of it seemed to be me + Christo expressing critical doubts and others rallying to the defense, I really enjoyed the whole thing and the way it seemed to deepen our interactions as a community and understandings of ourselves. (Says the person who got soooo excited and talked way to much, which I would apologize for, but I just know it will happen again.)

While I don’t know that I was convinced by people’s defense of the work, the passion was clearly there, and in the end, that is probably a better defense than the theoretical ones.

My favorite part of the conversation was Christo’s distinction between “doorbell art” and “knock-knock art”; the former is about lighting up “oh you can do that” while the latter is more of a joke. Nathan did a great defense of humor and its value and in the end I came to realize that I just don’t care for “provocative” art in this vein: it strikes me as mean-spirited and without insight to back it up. Real humor has a knowingness and fundamental awareness of power relations that seem really lacking in Bartholl’s work.

I also spent some time speaking about how I don’t believe you can truly critique something you don’t understand the ins and outs of, and that includes the workings of the medium. Looking at cultural situation is necessary, too, but it is not sufficient. That is: you can’t be a literary critic without understanding the making of literature, from the construction of plots to the milieu and assumptions of the writer; you would be a poor film critic if you didn’t understand the techniques that go into filmmaking; and to critique tech as a cultural force without understanding its origins is to do a work of performance art more than a work of cultural criticism.

This may be the second thing SFPC has really taught me about myself: I am loyal to the twin values of depth of understanding & incisiveness above nearly anything else. My little hungry brain: it just wants to consume everything in order to understand and finally know it. And to not do so when you could will never make a ton of sense to me.

Along that line: Today’s Radical Computer Science was just as delicious as the previous ones. The lecture covered tiny topics like infinity, Turing machines and their existential and otherwise interpretations, and the way 32-bit machines feel when confronted by 64-bit integers.

The image that has struck with me most, though, is the “Turing machine as a ‘poor mug’ inside a box pulling the box along a rail”: 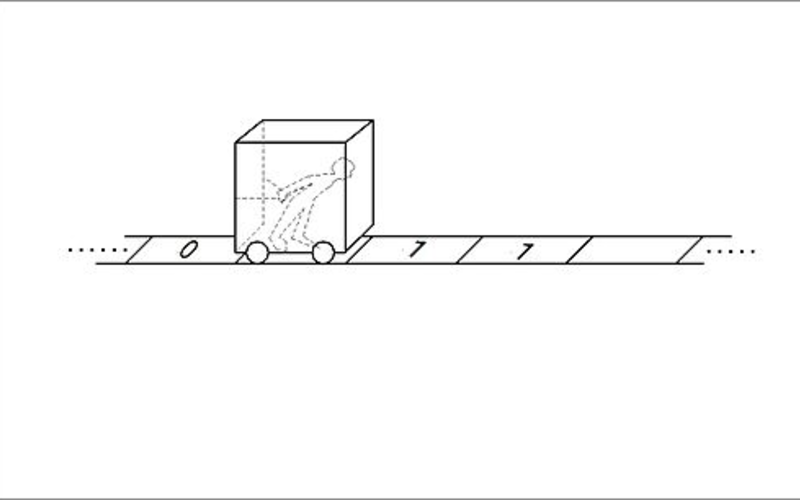 Something about this doomed figure + logic sent me into imaginations of Sisyphus getting jam yesterday and jam tomorrow but never, ever jam today. Fortunately, that drove us directly to one of the stranger YouTubes I’ve seen, and on top of that, I have some fun ideas to implement.

Now to see what everyone else had to say about today. Onward, Iron Giants.